Russell Library is open for grab-and-go service from 10am - 5pm Monday through Saturday!

Curbside pickup is also an option. Call 860-347-2528 or visit https://russelllibrary.org/curbside-pickup/ to take advantage of this convenient service. 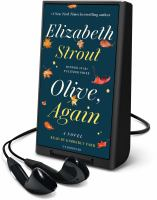 Description
#1 New York Times bestselling author and Pulitzer Prize winner Elizabeth Strout continues the life of her beloved Olive Kitteridge, a character who has captured the imaginations of millions of readers. Prickly, wry, resistant to change yet ruthlessly honest and deeply empathetic, Olive Kitteridge is a compelling life force (San Francisco Chronicle). The New Yorker has said that Elizabeth Strout animates the ordinary with an astonishing force, and she has never done so more clearly than in these pages, where the iconic Olive struggles to understand not only herself and her own life but the lives of those around her in the town of Crosby, Maine. Whether with a teenager coming to terms with the loss of her father, a young woman about to give birth during a hilariously inopportune moment, a nurse who confesses a secret high school crush, or a lawyer who struggles with an inheritance she does not want to accept, the unforgettable Olive will continue to startle us, to move us, and to inspire moments of transcendent grace.Advance praise for Olive, AgainThere's no simple truth about human existence, Strout reminds us, only wonderful, painful complexity. 'Well, that's life, ' Olive says. 'Nothing you can do about it.' Beautifully written and alive with compassion, at times almost unbearably poignant. A thrilling book in every way.-Kirkus Reviews (starred review
Also in This Series

General Note
Title from Playaway label.
General Note
Issued on Playaway, a dedicated audio player.
General Note
One set of earphones and on AAA battery required for playback.
General Note
Previously released by Penguin Random House LLC., ℗2019.
Participants/Performers
Read by Kimberly Farr.
Description
"And now Olive has indeed returned, as indomitable as ever, navigating her next decade and the changes -- sometimes welcome, sometimes not -- in her own life. Here is Olive, strangely confident in her second marriage, in an evolving relationship with her son and his family, and crossing paths with a cast of memorable characters in the seaside town of Crosby, Maine. Whether with a teenager coming to terms with the loss of her father, a young woman about to give birth at a hilariously inopportune moment, a nurse who confesses a secret high school crush, or a lawyer who struggles with an inheritance she does not want to accept, the irascible Olive improbably touches the lives of everyone around her."--,Provided by publisher.
Similar Series From NoveList
Similar Titles From NoveList
Similar Authors From NoveList
Borrower Reviews
Librarian Reviews
Published Reviews
Reviews from GoodReads
Loading GoodReads Reviews.
Citations
APA Citation (style guide)

Note! Citation formats are based on standards as of July 2010. Citations contain only title, author, edition, publisher, and year published. Citations should be used as a guideline and should be double checked for accuracy.
Staff View
Grouped Work ID:
e68b1d0b-2a0f-4c6d-db76-e1967eb12556
Go To GroupedWork